DEVELOPMENT OF LASER WELDING THROUGHOUT A CHAIN OF EU FUNDED PROJECTS

Ships made of Light – Lighter Ships

The most relevant impacts that have been yielded by laser welding in shipbuilding are summarised below. Hence, laser welding in the shipbuilding industry considerably contributes to several of the exploitation outcomes (EOs) in the implementation plan of the European Technology Platform WaterborneTP, especially EO8 Leading shipbuilding, EO2 The low energy, low emission ship, EO6 The European Cruise Ship. 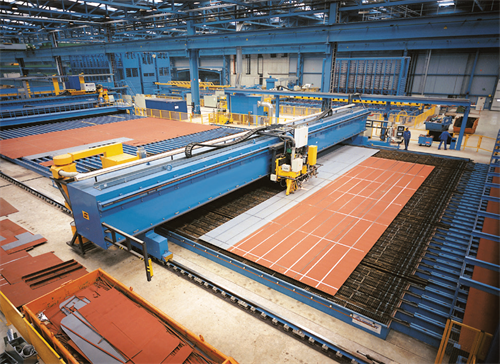 One of the largest laser welding installation in the world: Panel
line (30m x 30m) for butt and fillet welding with disc & CO2 laser, operating at Meyer Werft, Papenburg since ~2010 , Source: Meyer Werft

Meyer Werft in Papenburg, Germany, is one of the early adopters of laser welding, and has becomeworld leader in production of large cruise vessels since. The explanations below predominantly follow the developments taken by Meyer Werft, thus serving as an example on how beneficial strategic production technology innovation can be for European manufacturers of highly specialised vessels. It has to be noted however that there are more European shipyards than Meyer Werft which use laser welding technology successfully.

In the early 1990s, the knowledge about the potential for material processing supported by laser had achieved a critical level and evoked interest in realising concepts for laser based manufacturing in shipbuilding. A few years later, the first laser cutting machines for shipbuilding appeared on the market, but shipyards also realised the potential of laser welding to provide competitive advantages. In a nationally funded project from 1994-1998, Meyer Werft did comprehensive research and development on laser welding.

The work did not only comprise the realisation of a prototype welding facility and the qualification of novel welding processes, but also product innovation. Hence, the entirely new lightweight I-core panel was introduced thanks to the newly developed laser welded hidden Tee joint (pic. above). In the aftermath of the project, Meyer Werft installed a productive laser facility, successfully produced structures for vessels, and delivered panels to customers outside shipbuilding for several years.

A radical step towards breakthrough of laser application

The I-Core technology proved to be very suitable for several structural members of cruise ships (e. g. stair case landings, walls). However, existing rules and other obstacles prevented I-Core from replacing the conventional design of major parts of a cruise vessel’s structure. To make much wider use of the merits of laser, a way had to be found to produce conventional ship structures.

At the end of the 1990s, this goal became achievable by means of laser hybrid welding, i. e. by creating a process that combines laser with conventional arc welding. Meyer Werft took a radical step in 2000, removing the conventional panel line completely and replacing it with a laser hybrid welding facility both for butt and fillet welds. No doubt, this was one of the largest laser welding installations worldwide, both in terms of installed power and the size of the panels produced. An integrated design approach combining laser welding, new clamping devices and a novel edge preparation based on milling ensured reliability and productivity. More than 300km welds – corresponding to more than half of the weld length of a cruise vessel of the time – were now welded in extremely high quality with lasers.

The investment paid off within a few years, and the facilities became too small to keep pace with Meyer Werft’s increasing order book and with the size of the ships built. Based on the success of the first installation, in 2010 Meyer Werft invested in a second production line of flat sections sized 30m by 25m, equipped with disc and CO2 lasers for butt and fillet welding.

Further to what has been described above, a wealth of research activities for laser processing in shipbuilding were undertaken. In this story, only a selection of the achievements can be mentioned in note form:

How big is the success?

Meyer Werft’s and other shipyards’ research efforts with respect to laser technology received considerable fundings from EU and national programs. It is assumed that the magnitude of private investments that were made subsequently to exploit the gained knowledge is about five times as high. This leverage factor already gives an idea of the usefulness of the initial fundings. As for the numerable technical merits of applying laser technology, production technology experts at Meyer Werft sum up: “Due to the lower energy input per unit length offered by laser hybrid welding, the quality of joints has improved significantly. This pays off by ca. 30% reduction of efforts for straightening of distorted welds. At the same time, the lead time in panel production was reduced dramatically. This applies particularly for fillet welds, since this is the joint with the highest share. We have doubled or tripled our welding speeds compared to conventional techniques.“ The results in competitiveness Meyer Werft has gained become obvious when comparing some of the company’s key figures of 2000 and today: While increasing the work force by some 50 %, the number of vessels delivered per year has doubled and their size has increased by ca. 50 % This is, not solely but to a very large extent, the result of innovation in manufacturing technology.

Beyond the figures above that indicate the production performance, using laser in shipbuilding bears a number of additional advantages. Ship weight reductions for instance have been achieved due to the use of thinner metal sheets and due to the reduced amount of levelling compound that needs to be added thanks to the improved accuracy. This helps saving energy and avoiding emissions in the production process and over a ship’s operational life. Several recent research projects develop and apply Life Cycle Performance Assessment methodologies, thus addressing the challenging task to systematically assess and quantify new technologies’ economical, environmental and societal impact.

Meyer Werft is ready to face the next challenges. 3D laser welding, robotics, Industrie 4.0, additive manufacturing by laser are keywords for paving the way towards using laser in assembly stages subsequent to the panel lines and to relieve workers from the heaviest physical work processes. Besides the Mobility for Growth funding program, the program under the contractual Public-Private Partnership Factories of the Future will gain importance for Meyer Werft.