Europe is one of the leading maritime centres in the world with more than 300 key seaports along its coastline, controls around one-third of the world's merchant fleet, and accommodates many maritime service providers and marine equipment industries.

Maritime transport plays an important role in the EU economy. It transports 75% of EU’s external trade and more than one-third of internal trade - European ports welcome more than 400 million passengers each year.

On the other hand, transport as a whole represents almost a quarter of Europe's greenhouse gas emissions (GHG) and is the main cause of air pollution in cities. Mainly road transport is the biggest emitter accounting for more than 70% of all GHG emissions (in 2014) but the shipping emissions represent around 13% of the overall EU´s transport GHG emissions. It is obvious that the shipping industry needs to engage in systemic change in how ships are designed, built, fuelled and operated.

The NAUTILUS project focuses on passenger and cruise ships which are particularly affected by these policies as these ships are docked on ports or are near harbours for more than 50% of their operation time. Besides the legislations, there is higher societal pressure on passenger and cruise ships, since their customers, travellers and holiday goers, as well as local inhabitants are demanding a clean and smoke-free environment.

There are multiple possibilities to reduce ship emissions. One, which is already utilized by a lot of large passenger ships, is to replace diesel by LNG in conventional engines. In order to further reduce GHG emissions, there is the possibility to use alternative fuels, such as ammonia, methanol, ethanol and synthetic diesel, instead. Batteries and hydrogen can offer local-zero-emissions in terms of CO2 and pollutants. However, the technical feasibility of batteries or hydrogen for larger cruise ships is uncertain and critical. The NAUTILUS project intends to use LNG as a propulsion fuel, with further reduction of GHG and onboard emission by replacing conventional engines by SOFC-battery gensets.

The NAUTILUS project will develop a complete concept of a fully integrated energy system between 5 and 60 MW for a 1000 passenger expedition cruise vessel and a 5000+ passenger cruise ship. Additionally, a 60 kW functional demonstrator of the SOFC-battery will be developed, engineered, assembled and operated to validate the design and operation strategies. The digital design, as well as the physical demonstrator, will be evaluated against the marine safety regulations. 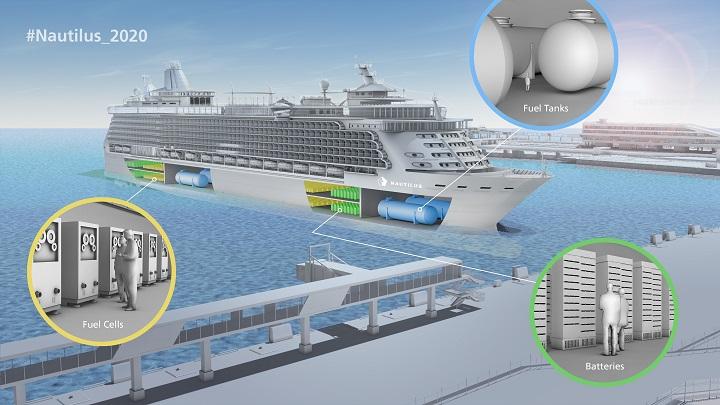